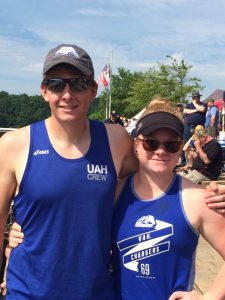 We have amazing nationally competitive collegiate rowers here in Huntsville! UAH rowers Kevin Cardno and Irene Thorpe won gold and silver medals Memorial Day weekend at at the American Collegiate Rowing Association (ACRA) National Championships at Lake Lanier Olympic Park in Gainesville, GA on Sunday. This is the national championship regatta for collegiate club rowers. Over 300 entries from sixty eight colleges from New England to California rraced 2,000 meters down the course. UAH senior and RCRC junior assistant coach won the gold medal in the Mens single by 13 seconds. Irene Thorpe, UAH junior and junior assistant coach at Huntsville/Madison County Rowing and Watersports finished second more than 17 seconds ahead of the third place boat from the College of William and Mary.

Kevin’s outstanding performance in the single over the past two years has been noticed by the developmenl coaches for the U.S. Senior National Team. He has accepted an invitation to row for the summer with the New York Athletic Club (NYAC) sculling program where this largely self-coached athlete will  experience NYAC’s nationally recognized coaching staff, and the opportunity to train and race with a highly competitive group of dedicated athletes.