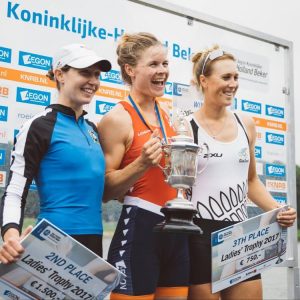 This past weekend, June 24-25, Mary Jones Nabel represented Cambridge Boat Club (Boston, MA) at the Holland Beker International Regatta at the Brosbaan, the Netherlands for the top-billed Ladies Trophy event. This was the 124th Holland Beker Regatta which is one of rowing’s longest running regattas, stretching back to its roots in 1886.

As a lightweight rower competing in an open-weight event, Mary had an exciting series of races. She qualified for the semi-finals out of the heats by finishing second by .36 seconds behind Emma Twigg  (Hawkes Bay Rowing Club, New Zealand), an A finalist in the 2016 Rio Olympics and 2016 Ladies Trophy Champion. The semi-final on Sunday morning brought another second place behind Inge Jansen of the Netherlands, silver medalist in the women’s 1x at the World Cup II Regatta in Poznan, Poland on June 18.

In the final, Mary showed amazing toughness through the whole race as she was compelled to a higher stroke rate than her much taller rivals. While the commentators and spectators were awaiting a strong sprint the end by Emma Twigg, Mary doggedly pursued Inge Jansen to finish second but 3.7 seconds ahead of Emma Twigg in third. She received a prize of 1500 Euros for her efforts which may go to a celebratory ice cream before her final preparations for World Cup III Regatta in Lucerne, Switzerland July 7-9.